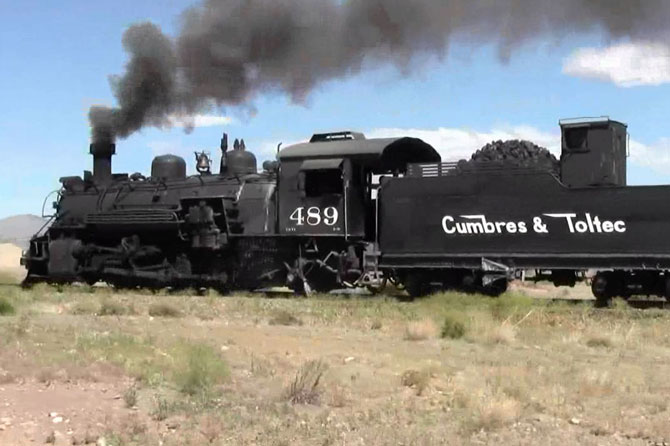 
Historical Conejos County is the Gateway to 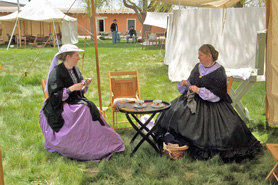 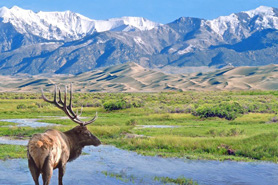 This is Elk Country -- Along the Los Caminos Antiguos Scenic Byway

The Cumbres & Toltec Scenic Railroad is America's most authentic steam railroad, just as it was for a century, from the coal tipple to the conductor's smile. Twisting and turning through the beautiful San Juan Mountains on tracks that tamed the West, you'll cross the Colorado-New Mexico border eleven times. Count them as you look down from Windy Point, up at the spires of Phantom Curve, or into the depths of Toltec Gorge.

Los Caminos Antiguos takes you to Colorado's oldest surviving community (San Luis, 1851), the oldest church (Our Lady of Guadelupe, in Conejos), and one of its first military posts (Fort Garland). Drive, explore, take your time- there's plenty of it to spare. Be sure to spend time at Sanchez Reservoir State Wildlife Area see birds such as gulls, loons, grebes, passerines, sage sparrows and sage thrashers.

Our Lady of Guadelupe Parish Church. The oldest Parish in Colorado built in 1857. Located in Conejos, Colorado just off US Highway 285. Joseph Machebeuf (1812-1889), spread Roman Catholicism throughout Colorado. A French missionary, he was sent to Colorado from Santa Fe by Archbishop Jean Lamy. He said first Mass in Colorado in a crude adobe chapel in Conejos in 1858. It was later replaced by Our Lady of Guadelupe Church, Colorado's oldest church.

(Manassa Mauler Manassa, Colorado) Jack Dempsey, born in Manassa, Colorado on June 24, 1895 went on to become the heavy-weight boxing champion of the World. At age 14, Jack began fighting at mining camps under the name "Kid Blackie." At age 24, Jack was the first superstar of the ring, and one of the most popular champions ever. A fierce fighter and a brutal puncher, he took the heavy weight crown from Jess Willard. In 1950 the Associated Press voted the "Manassa Mauler" the best heavy-weight of the first half of the 20th century. Dempsey retired with an astounding record of 64-6-9. 49 of these wins were knockouts. Jack died in 1983. The Museum opened in the 1960s in a one room log cabin near the spot where Jack grew up. Displayed are boxing mementos and pictures donated by locals and the Dempsey family. Open Memorial Day through Labor Day.

NEARBY ATTRACTION in the SAN LUIS VALLEY

Be Inspired by GREAT SAND DUNES NATIONAL PARK and Preserve

Nestled in Southern Colorado, North America's tallest dunes rise over 700 feet high against the rugged Sangre de Cristo Mountains. The wind shaped dunes glow beneath the rugged backdrop of the mountains. This geologic wonderland, containing 30 square miles of dunes, became a national monument in 1932. With the passage of the Great Sand Dunes National Park and Preserve Act of 2000, resources now also include alpine lakes and tundra, six peaks over 13,000', ancient spruce and pine forests, large stands of aspen and cottonwood, grasslands, and wetlands--all habitat for diverse wildlife and Rocky Mountain plant species.

FUN THINGS TO DO

Find local Maps & Fun Things To Do for your Colorado Vacation

©Copyright 1997- by The Colorado Directory, Inc. This is a directory only; it is not and does not contain a recommendation, warranty, guaranty, inducement or endorsement of any kind. Representations herein were supplied by the individual businesses. The publisher, The Colorado Directory, Inc., does not assume any responsibility for truth, falsity or completeness of any representation made herein or any errors, changes, services rendered, or changes made in the use of this directory. This information was compiled as accurately as possible. Prices and services are frequently subject to change. Errors called to the publisher's attention will be corrected in the future. All rights reserved. No part of this publication may be reproduced, stored or transmitted in any form or by any means, without permission in writing from the publisher.