Road to top of Mount Evans 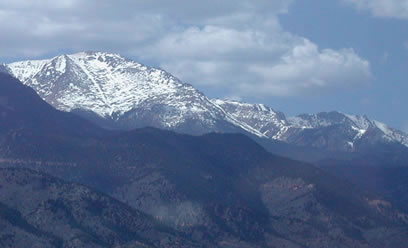 In Colorado's high country, skies are bluer and stars are brighter because of our altitude. Our air is thinner, with less oxygen, than at sea level, especially above 7,000 feet. Until your body adjusts, go easy on physical activity:

Altitude can produce some unusual effects such as dizziness, nausea, and headaches. Make sure you travel with a companion and know the early onsets: severe coughing, wheezing, shortness of breath, or chest pain. If you notice any of these symptoms, get that person to a lower altitude as quickly as possible.

If you adopt the proper attitude toward Colorado's altitude, you and your family will have the most enjoyable vacation experience possible.

CLIMATE/WEATHER
There is an average of 30 degrees difference between low temperatures at night and high temperatures in daytime.

CLOTHING
Dress in layers! We have a saying in Colorado: "If you don't like the weather, wait 5 minutes!"

DON'T BLAME FIDO
If your dog seems sluggish in the mountains, know that dogs do not automatically adjust to higher altitudes. Like humans, pets should be given time to get used to the thinner air. Give your dog lots of water, and while hiking, be careful of overheating. If your dog lags behind or its tongue hangs out, your dog is overexerted. Let the dog rest. If hiking away from water, carry a water bottle for your dog. Note: Dogs can get Giardia drinking from streams. Check with your vet for giardia shots. Also be sure to watch your dogs paws. Hiking in the woods can cause cuts, scrapes and foot pad injuries. Carry an anesthetic and gauze or tape to bandage wounds.

DEAD AIR
Cell phones don't always work in the mountains. If you have to use one for an emergency, a higher ridge-line will give you the best reception. (Just don't be on a ridge during a thunderstorm!) If you call 911, tell them where you are (ie: what trail, park, peak or county). Depending on where you are, you may reach an emergency center for a different county.

NO BUTTS ABOUT IT
Use your ashtray. Colorado state law states that anyone who throws a lit cigarette or other burning material from a moving vehicle faces a fine of up to $1,000 and could spend a year in jail. Triple civil damages can be charged for causing a wildfire.

BE PREPARED
The drier climate, higher altitude, and different outdoor pollens can trigger allergic reactions. If you have allergies, always be prepared for medical emergencies. Carry antihistamines or other allergy medications with you at all times.

LEAVE NO TRACE is a set of outdoor ethics to teach people about conservation of land and wildlife.

Courtesy of Bureau of Land Management

Be sure to check out the Ultimate Beginner's Guide to Hiking before heading out on your next hiking adventure!

RULES OF THE ROAD Bicyclists have all the rights and duties applicable to the driver of any other vehicle and can be penalized for violating traffic laws:

Today, only the black bear is known to exist in Colorado. Population estimates range from 8,000 to 12,000 bears. These bears can run up to 35 miles per hour, run up or down hills easily, and climb trees.

Bears use trails just as people do since it's easier to travel on a trail than through underbrush. Being aware of tracks, droppings and other bear signs (claw marks on trees, rotten logs ripped apart and hair on tree bark from rubbing) will allow you to determine better the presence of bears. Bears may be active anytime, during day or night, most often during morning and evening twilight.

If we are to live with wildlife, we all need to do our part:

What to do if you meet a black bear:

Courtesy of Colorado Division of Wildlife

We've all had it happen. You look up from the trail just in time to see an animal dive out of sight. The truth is, most animals see and hear us long before we catch their drift. Fortunately, there are simple ways you can help blend into an animal's surroundings. The ultimate wildlife watching experience is behavior watching - viewing animals without interrupting their normal activities.

FADE INTO THE WOODWORK

LET ANIMALS BE THEMSELVES

COME TO YOUR SENSES

HOW TO USE BINOCULARS