The South Fork Area is where the South Fork of the Rio Grande joins the main body of the Rio Grande. Situated at the western edge of the San Luis Valley, it is one of the biggest intermountain valleys in the world. Since the late 1880s until just recently, South Fork, at 8,250', has been a logging and lumbering community.

Colorado's upper Rio Grande from the Rio Grande Reservoir above Creede through Wagon Wheel Gap and South Fork to Del Norte is "a high-country angler's paradise...an undiscovered paradise," according to American Angler, the magazine of fly fishing and fly tying. The Rio Grande between South Fork and Del Norte has been designated Gold Medal trout water, which means it offers the greatest potential for trophy trout fishing success in Colorado.

The area, at the foot of Wolf Creek Pass with its deep-power ski resort, is near numerous, year-round recreational possibilities. Whether you hike it or drive it, the surrounding mountains have deer, elk, grouse, ptarmigan, bighorn sheep, snowshoe rabbits, and even an occasional bear, bobcat or cougar! 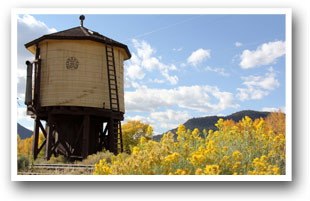 South Fork in the Fall 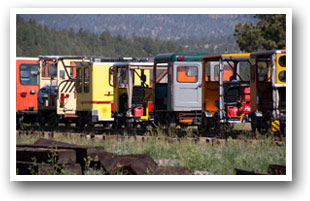 The South Fork area includes Del Norte, first inhabited by the Folsom Peoples 10,000 years ago. They were followed by the Anasazi, Pueblos, Kiowas, Navajos and Apaches, which led the way for a rich history of Spanish inhabitants. Today, mining, farming and ranching flourish and are the mainstays of the local economy. Del Norte is known for a moderate high desert climate. Downtown Del Norte includes the famous Historic Windsor Hotel as well as shopping and dining facilities. 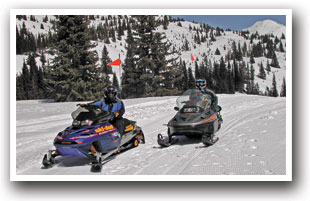 Explore South Fork on a Snowmobile 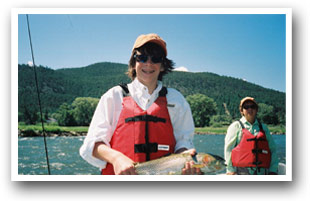 Travel a little way and visit the old mining town of Summitville. This is the home of the old Frenchman's Treasure tale. The story tells of 300 men coming from France who mined a mountain of gold, yet many died from natural disasters, Indian attacks, and possible Spanish attacks. The French hid the mountain of gold. Only one returned to France with the map leading to the location of the gold. Some believe it was found, yet others continue to hunt for it. Also travel the Silver Thread Scenic and Historic Byway beginning at South Fork, continuing through Wagon Wheel Gap and Creede, ending at Lake City.

South Fork your outdoor adventure center at the base of the San Juan Mountains. Getaway along the Silver Thread Scenic Byway and the Rio Grande! Fish, hike, hunt, bike, golf, wildlife, Jeep, ATV, and ski.

A comfortable place to rest, away from highway noise, after your adventures near Wolf Creek Pass and the Silver Thread Scenic Byway. Alpine Trails Park has RV sites and a 2-bedroom cabin in South Fork.

Since 1959 families have been coming to Fun Valley for a safe place to experience nature. South Fork is deep in the beautiful Colorado Rockies. Our resort offers cabins, RV park sites and campground tenting.

WiFi in your RV! A traditional family campground east of South Fork along the Rio Grande River with fly-fishing: riverside RV sites, separate tenting area, and a sleeping cabin. Stay for a night, week, month!

South Fork your outdoor adventure center at the base of the San Juan Mountains. Getaway along the Silver Thread Scenic Byway and the Rio Grande! Fish, hike, hunt, bike, golf, wildlife, Jeep, ATV, and ski.