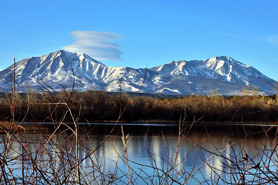 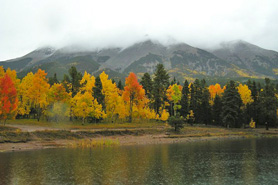 The Spanish Peaks, Los Cumbres Espanolos, are prominent landmarks along the eastern front of the southern Rockies. Their snow-capped summits rise above the arid plains, making an easy reference point for travelers within the region. These travelers included Ute, Comanche and Apache Tribes, as well as Spanish and French trappers, gold seekers, hunters, pioneers and cattle ranchers. The Aztecs believed the Peaks were a source of mystery and hidden treasure. The Spanish Peaks are within the San Isabel National Wilderness Area and are known as one of the best examples of exposed igneous dikes. Dikes are formed when molten igneous material is forced into a fracture or fault before becoming solidified. There may be over 500 such dikes in the area. 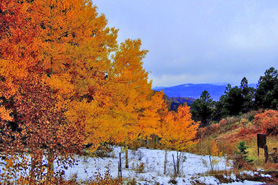 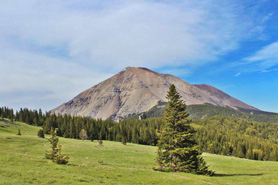 The West Spanish Peak's elevation missed the 14er mark by 377 feet; its' summit peaks at 13,623 feet. Its' twin brother, the East Peak, is a bit shorter at 12,708 feet. However from a distance you would never know. The Spanish Peaks Wilderness Area, in Huerfano County and Las Animas County, Colorado, are the centerpiece of the Highway of Legends Scenic Byway. After the Louisiana Purchase in 1803, Zebulon Pike was sent to explore. In 1821 the Santa Fe Trail was established with guideposts at the base of the Spanish Peaks, along the Mountain, and at Taos Branches of the Trail. From Bent's Old Fort, the Mountain Branch went southwest past the Peaks through Trinidad and over Raton Pass to Santa Fe, New Mexico. The Taos Trail passed north of the Peaks along the Huerfano River, up Oak Creek, over La Veta Pass into the San Luis Valley, and then south to Taos, New Mexico. Explorers, lawmen, gunslingers, and mountain men with names like Kit Carson, Wild Bill Hickock, John Freemont, Black Jack Ketchum, Zane Grey, William Bent, and Bat Masterson traveled the area frequently. 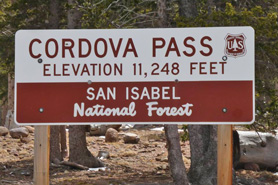 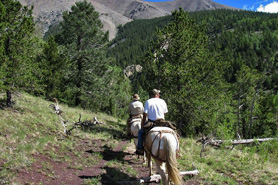 WEST PEAK HIKING TRAIL: Cordova Pass Trailhead is a 40 minute (12 mile) drive from Cuchara, via Colorado Highway 12 and Country Road 364/Forest Service Road 415. The best time to hike is in late Spring to early fall, with an early morning start if you plan to reach the summit. The hike is 2,200 vertical feet over 3 miles (one way), and most of the elevation gain is in the last mile which is steep. At the summit, the panorama view is spectacular; see the Culebra Range, East Spanish Peak, and the Great Plains of Colorado.

EAST PEAK HIKING TRAIL: Wahatoya Trailhead is a 17 minute (7 mile) drive from La Veta, via Country Road 360. This 9.2 mile loop is for the experienced hiker with it's single track, steep elevation gains, and a mile of switchbacks into the Spanish Peaks Wilderness Area. At the summit you will see West Spanish Peak, the Sangre de Cristo Mountain Range, Greenhorn Mountain, Pikes Peak and Fisher's Peak. Elk and deer are common in the area.

JOHN B FARLEY WILDFLOWER OVERLOOK MEMORIAL TRAIL: From Stonewall take Colorado Highway 12 to Forest Service Road 415;17 miles (26 minutes). This is a family friendly short (100 feet) interceptive trail perfect for wildlife watching and in late spring to early Summer the wildflowers will make your heart sing. In winter it's a great place to snowshoe!

LOCATION: In South Central Colorado: to the North are La Veta and Walsenburg; to the East Aguilar and Trinidad; to the South Stonewall and Weston; and to the West Cuchara. You can see the Peaks from I-25 between Trinidad and Walsenburg. The West Spanish Peak is best reached by Colorado Highway 12.